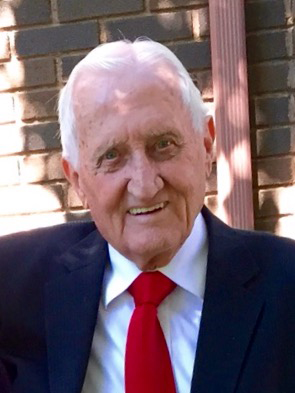 the Class of ‘48.  After graduation, Duane and a friend enlisted in the U.S. Navy where he served for four years in Japan during the Korean War.

He attended BYU where he met the love of his life, Barbara Rallison.  They were married June 4, 1954 in Whitney, Idaho.  Their marriage was later solemnized in the St. George Temple.  They celebrated 67 years together.  They lived in American Fork, St. George, and Gooding, Idaho.  They settled in Logan in 1959 where they raised their family.

Duane was active in Kiwanis and JayCees where he made friendships that lasted a lifetime.  Duane and Barbara moved to Bountiful in 1982.

He worked as an accountant for auto dealerships, Wells Fargo, and First Security Bank; he retired in 1999.  He then served 19 years as a service missionary for the Church of Jesus Christ of Latter-day Saints.

He enjoyed bowling, fishing, and golfing with his sons.  He also loved to travel; his adventures included several cruises with friends as well as many road trips to Arizona and California.

Duane was an active member of the Church of Jesus Christ of Latter-day Saints; he faithfully fulfilled various positions in the Church.  He especially enjoyed working with youth.  His favorite calling was serving in a Young Single Adult bishopric at Utah State University.

He also loved children; they looked forward to receiving some Smarties candy and a little teasing from him.

His greatest joy was his family.  He is survived by four children:  Scott (Arlene) of Mesa, Arizona; Michele (Dan) Brown of Providence; Fred (Sue) of Providence; and Richard (Tami) of Highland; 14 grandchildren; and 43 great-grandchildren.

He was preceded in death by his parents; seven brothers; five sisters; and his son, Richard, who died October 9, 2021.

Graveside services will be held on Wednesday, October 20 at 12:00 noon at the Whitney, Idaho Cemetery.

To order memorial trees or send flowers to the family in memory of Duane Beck, please visit our flower store.