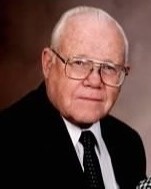 Donald Neville, our beloved father and grandfather, passed away on Tuesday, September 27, 2022, in Layton, Utah.  Donald was born at home on August 22, 1928, in Layton to Octavia Call and John Edward Neville. He married his sweetheart, Margery Booth, on November 21, 1956, in the Salt Lake Temple.

Donald grew up on a farm in West Layton and graduated from Davis High School and Utah State University. He served for 2 years in the New England States Mission, as well as 2 years in the United States Army.

His first job was teaching school in Grantsville. Later, he and Margery settled in Kaysville where they raised their family. He worked at Hill Air Force Base as a computer programmer.

Donald was a stalwart member of the Church of Jesus Christ of Latter-day Saints and served faithfully in many callings. He was an exemplary home teacher often delivering home baked pies to those he ministered to.

Donald was an expert gardener and freely shared his produce with those around him. He ran a Christmas Tree farm for many years and later grew giant pumpkins. One of the highlights of his year was sharing his pumpkin patch with neighbors, family and friends.

In lieu of flowers, donations can be made to the Church of Jesus Christ of Latter-day Saints Humanitarian Fund.

Services will be live-streamed and may be viewed at www.lindquistmortuary.com by scrolling to the bottom of Donald’s obituary page.

To order memorial trees or send flowers to the family in memory of Donald Neville, please visit our flower store.