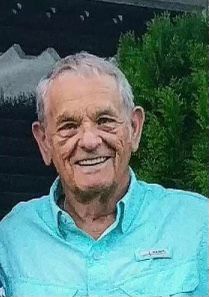 Darrold W Thompson, 84, passed away on Saturday, April 23, 2022, at his home in Washington Terrace from a fall. He was born July 13, 1937, in Burley ID to Kenneth and Mary Thompson. He later moved to Port Orchard, WA. In 1955 he joined the U.S.A.F. He was stationed at Hill Air Force Base, bringing him to Utah where he met the love of his life Geraldine Perfetto. They were married on June 21, 1958, in Ogden, UT. They raised their three boys in Washington Terrace.

During the 1980's he was Captain for the Washington Terrace Volunteer Fire Dept. He was also employed at HAFB as a Quality Assurance Specialist. He retired from HAFB in 1990, and the USAF in November 1992 as a Chief Master Sergeant.

Dad was always busy, never wanting to rely on anyone. In his free time, he loved to do wood working where he made numerous clocks, jewelry boxes and many tables and desks. His latest project was redoing his reloading table which he completed just before his passing. Dad also loved drag racing, he spent countless hours at the racetrack watching his boys race and recently his granddaughter. Dad also loved his guns, he said, "You can never own too many" and he really enjoyed reloading his own ammo. He loved his time working at the shooting range and made lifelong friends there. He was a proud supporter of the Sheriffs’ Association.

Dad was a stubborn no non-sense kind of guy. But those that knew him knew he had the world’s biggest heart. He was very loving and took great care of our mother up until her death in 2014. He always made sure she had red roses on her birthday, wedding anniversary and he never missed putting them on her grave on the anniversary of her passing which was exactly eight years prior to his own.

Darrold is survived by his sons, Phillip (Denise), Ogden, UT and Daniel (Suzanne) Washington Terrace, UT; seven grandchildren and seven great-grandchildren. He was preceded in death by his wife, Geraldine; son, Bart; great-grandson, Ashtyn; mother and father, Kenneth and Mary and his brother, Dean.

To order memorial trees or send flowers to the family in memory of Darrold W Thompson, please visit our flower store.