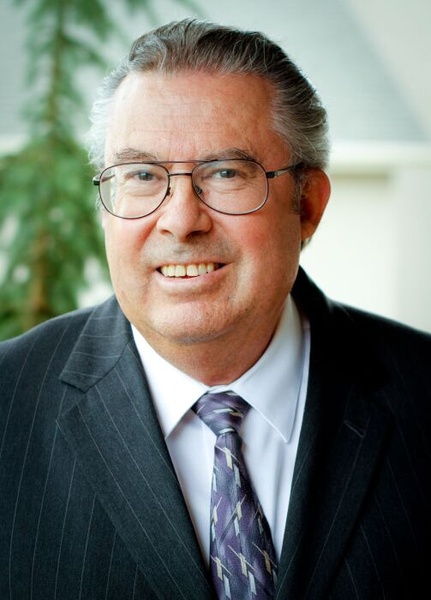 Dan was born in Blackfoot, Idaho on July 18, 1947 to Thomas Carl and Ruby Gertrude Harman, the first child of three, with two sisters born after him. He grew up on a farm in Thomas, Idaho with his sisters Diana and Jolene. He worked on the farm and raised prize-winning steers in the 4-H club. He was very studious and musical. He toured with the high school jazz band, was a state champion debater, and was inducted into the National Honor Society. He graduated from Snake River High School in the top of his class with a scholarship to BYU in May 1965. Dan served as a missionary for the Church of Jesus Christ of Latter-day Saints in the California Mission from 1966-1968. He attended Brigham Young University in Provo, Utah when he returned. It was at BYU where he met Janis Lynette Bates from Northboro, Massachusetts. They were married in the Idaho Falls, Idaho temple on Sept 3, 1970. Dan’s sister, Diana, was dying of kidney disease at the time. Dan and Janis Lynette decided for Dan to donate his kidney to his sister in a successful kidney transplant on May 27, 1971, saving his sister’s life. He returned to BYU to complete his education and graduated in May 1973.

Dan received an accounting degree from BYU and worked as a public and private accountant and a financial planner. Dan and Janis Lynette raised six children and lived in Utah, California, Wyoming, Massachusetts, and Washington state, returning to Utah just recently to live near family. Dan enjoyed fun and travels with his family, hunting, running, jazz music, missionary work, and family history. He was a devoted husband, father, and grandfather. He was a member of the Rotary Club and served faithfully in the church all his life.

Dan had open heart surgery in 2004, the first of three surgeries to correct his mitral valve. He suffered from many other health problems and surgeries over a 20-year span, but through it all, he continued to work, support his family, and share a good sense of humor. His family remembers his love of music, of hard work, of humor, and of God. He will be greatly missed.

Dan is survived by his wife, Janis Lynette Harman, his children, Priscilla Kathryn Finlayson, Lori Lynette Hansen, Daniel Wesley Harman, Angela Marie Sorenson, Julie Elizabeth Harman, and John Thomas Harman, as well as 27 grandchildren, with two grandchildren passing on before him. He is also survived by his sisters, Diana McGuire and Jolene Jones, and their families. He is remembered fondly by his cousin, Jim Neitzel, and his friends, Stafford Larsen, Thane Thomas, and Richard Winmill.

Flowers can be sent directly to the Lindquist Mortuary and donations will be accepted at https://everloved.com/life-of/dan-harman.

Note from his wife, Janis Lynette: Our family is so grateful that Dan was part of our lives. He appreciated all who gave him love and kindness throughout his life and especially the angels who the Lord brought into our lives to help care for him during so many health challenges he experienced. He was a true soldier for the Lord throughout all his life. He continues now to help Him in His work and glory as he watches over all of us.

To order memorial trees or send flowers to the family in memory of Danny Harman, please visit our flower store.