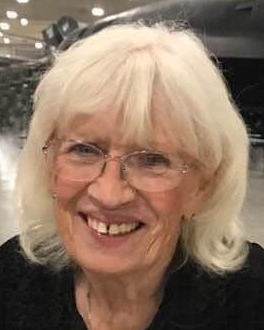 Christine van Leeuwen passed away on the evening of Thursday, November 24, 2022.  She was born in Worms, Germany in 1939 and moved to America in her teens with her mother.

Christine married her first husband, Mel, in the 1950’s. Together they had three children, Ellen, Michael, and Annie. After they separated, Christine moved to Utah. This is where she met John van Leeuwen, while working in the delicatessen she owned. Christine and John were married in 1987. John brought two more children into the marriage, Diana and Gary.

Christine worked for First Security and later Wells Fargo for many years as an account manager, retiring after a long and fulfilling career she loved.

Christine and John also loved square dancing, a hobby they both had prior to their marriage that they shared with their children and grandchildren. They also enjoyed yearly trips to both the Oktoberfest and HOF festival, and later helped with the HOF festival for many years.  Christine loved traveling to anywhere she could, and often made the trip back home to visit both her and John’s family. Later they would travel with their daughter Annie to work events. They loved helping wherever they could and with any task asked! This is where she began her journey of becoming an Oma to everyone. There was never a soul who met her on these trips that didn’t end up calling her Oma. She was loved by many and gave her love in return.

After the passing of her husband John, she began to volunteer at the Hill Aerospace Museum and took pride in making sure everyone signed in and followed the rules. She loved her volunteer work there and often told people about it every chance she got.

Christine began showing signs of dementia and Alzheimer’s. Annie cared for her as the disease progressed over the years. They had many adventures of their own. Her true companion through the end of her life was her Libby. Christine had a love for all her animals over the years, but Libby was her one special pup. Libby was always by her side and not afraid to make sure anyone that back talked Christine got an earful of her spicy barks. Christine will be missed by all those who knew her as she held such a special place in so many hearts.

Christine is survived by her children, Annie (Ryan), Michael, Diana (Randy) and Gary (Raylene); her grandchildren, Charlotte (Marcus), Christopher (Brandi), Sabrah (Anthony), and Joshawa (Janae). She is also survived by her sister, still living in Germany, Inge (Ernst). Christine was preceded in death by her husband John, her daughter Ellen, and her first husband Mel.

At this time the family would like to thank those who cared for her at Truewood in Cottonwood Heights.

In lieu of flowers please make donations to Rocky Mountain Dachshund rescue at https://rockymountaindachshundrescue.com/ or your favorite animal charity, as we all know how much she cared for and loved all animals.

To order memorial trees or send flowers to the family in memory of Christine van Leeuwen, please visit our flower store.