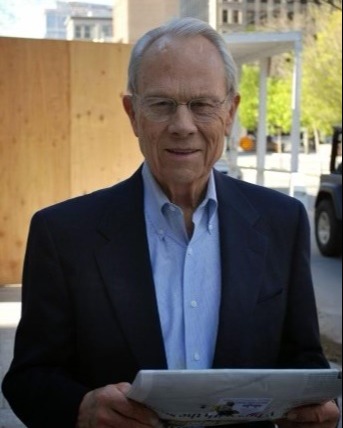 After a life built upon love for his family and friends, Chuck returned to his heavenly home on December 5, 2022, at the age of 90. He was reunited with his sweet wife, Joey, his beloved parents, sisters, and his grandson. Chuck was born on January 3, 1932 in Huntington Park, California as the youngest of two children.

Chuck was raised in Westwood, California. As a child he loved riding his bike on the empty temple lot where the LA Temple now resides. He graduated from University High School in 1950. He loved to brag about graduating with Elizabeth Taylor! He enjoyed driving his VW

beetle and spent lots of time chasing the sun and perfecting his tan on the southern California beaches.

After high school he joined the armed forces as a naval aviator reaching the rank of lieutenant. As a Navy pilot he flew the AD Skyraider on and off the Shangri-La Aircraft Carrier. After the Korean War, Chuck moved back to Midway and was at his ailing mother’s bedside, nursing and caring for her through her battle with cancer. He continued to serve in the reserves, flying helicopters until retiring from the Navy in 1966. He started his college education at BYU in 1955 graduating in 1959 with a degree in political science.

Chuck met the love of his life, JoAnn Neubert, at BYU and they were married on September 9, 1959 in the Salt Lake Temple. Our dad dedicated his life to his sweetheart of 60 years and cared for her day and night until her passing in 2019.

Chuck had a 25-year career with IBM and during his tenure there, he frequently led the nation in sales. After an early retirement, he continued his sales career, first with Kodak and then R & L Fencing.

Chuck had several hobbies. He loved to ski, ride his Honda Trail 90, and he loved to drive his Mercedes. He and Joey loved to take their trailer up into the mountains with their dog Daisy. He had a great enthusiasm for mail. He wrote several letters a week to his kids and grandkids and loved sending news articles and family photos to his best friend Jim Graves in Virginia.

Chuck was known for his positive attitude and love for life. He never complained! He was always happy and encouraging to everyone around him. His kindness was infectious. His greatest treasure in life was his kids, grandkids and great grandchildren. He will be so dearly missed.

Chuck was preceded in death by his parents Lowell Eugene and Jessie Whitaker, stepmother Fearl, his sisters Donna Smith and Annie Richardson and his grandson, Ben May. He is survived by his daughters, Jessica Steele (Kevin); Bonnie Wilcox; Jennifer May (Clifton); and two sons, Chuck Turner II (Antonella); and Jonathan Turner (Jody).

Our family would like to extend our deepest gratitude to his caregivers at Fairfield Village Assisted Living for their round-the-clock loving care, as well as Chuck’s hospice and home health nurses Jen, Heidi,  Angie, and Seong.

To order memorial trees or send flowers to the family in memory of Charles Whitaker Turner I, please visit our flower store.