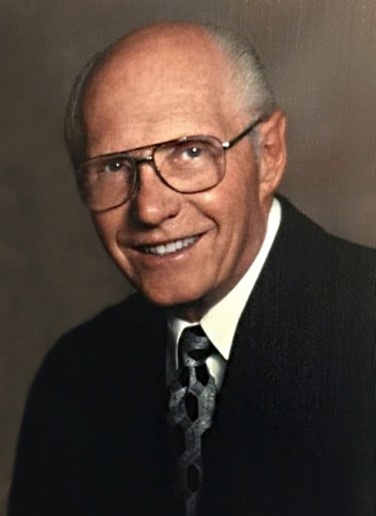 Chuck was born in Ogden Utah on June 16, 1927 to Harold and Doris Fronberg.  His life was one of extraordinary health and service. He was a man without guile; a true disciple of Jesus Christ, a gentle intelligent man full of integrity who focused on the things that matter most.  Chuck will be remembered and cherished as a kind and sincere “friend to all.”  He was known for his gift with numbers, his phenomenal memory, his interest in others and his warm twinkling eyes.

Following Chuck’s graduation from Ogden High School, he joined the Navy at age 17. He served from 1945 to 1946 and was a World War II Veteran. He possessed a deep love for his country. Chuck attended Weber State Jr. College and Brigham Young University and earned degrees in Business and Accounting.

Chuck served a two-year mission to the Eastern States for the Church of Jesus Christ of Latter-day Saints and sang in a men’s centennial choir. His mission provided a strong foundation for lifelong gospel study and a deep love for the Savior, Jesus Christ.

Chuck’s athletic passion was tennis and he won numerous tournaments and awards, including the 1948 Intermountain Singles Title.  He lettered in tennis at BYU.  He enjoyed teaching his children to play tennis and rarely, if ever, did his children beat him even as adults.

Following his graduation from BYU, Chuck was recruited by Howard Hughes and moved to California. There he met Loretta (Lori) Briggs at church one summer Sunday. Lori had also moved to Los Angeles and planned to work for the summer and then return to BYU in the fall. Chuck felt impressed to turn down the offer and follow Lori back to Utah. She was the love of his life and they married on July 1, 1955 in the Idaho Falls LDS Temple. Chuck often referred to Lori as “my anchor-- and the reason for my stability and any success I had in life.”

Chuck and Lori bought a home in Ogden Utah and raised their family there. Most of Chuck’s professional career was at Hill Air Force Base, where for 30 years he reviewed government contracts. He took great pride in his work and found purpose in carefully safeguarding taxpayer funds.  As a side job, he ran his own tax preparation business.

Above all, his roles as “father and husband” were his focus. For nearly two decades he lovingly cared for his wife who suffered from deteriorating health.

Lori and Chuck lived in Ogden for many years and then moved to Clinton for a few years. Eventually they moved to Fairfield Village in Layton Utah. There he was known for his care and concern for everyone.  He relished his time at Fairfield and fostered lasting friendships with the residents and the staff. We express deep appreciation to the staff and many friends at Fairfield who enriched his life and cared for him.

Along with his daily wheat germ, Chuck attributed his longevity to his attitude.  “Nobody grows old by merely living a number of years…Whatever your years, there is in every heart the love of wonder…”

Services will be live-streamed and may be viewed at www.lindquistmortuary.com by scrolling to the bottom of Charles’ obituary page.

To order memorial trees or send flowers to the family in memory of Charles "Chuck" Clayton Fronberg, please visit our flower store.