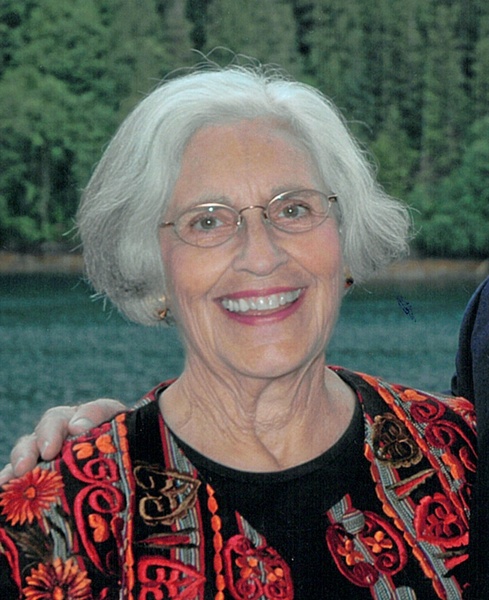 On July 20, 2022 Carol Victor passed away peacefully at Legacy House in Bountiful, Utah.  Her passing is a tender mercy as she struggled in recent years with memory issues and most recently, a broken hip.  She will be remembered by family and friends as a woman of strength, wisdom, and love.

Carol was born June 26, 1932 the third and youngest daughter of Frederick and Verna Burt. Born in Ogden, the family moved to Brigham City, Utah when Carol was eight years old. There she went to school, married, worked, and raised two children until the prospects of having grandchildren prompted a move to Bountiful, Utah.

As a young woman Carol developed a love for books.  Riding a bicycle from her home to the public library was a common outing.  It was on one of those occasions that a young and ambitious Maynard H. Victor noticed Carol and she caught his eye.  They began dating while attending Box Elder High School graduating in 1950.  Carol attended Weber College for a short period of time. For two years she worked at Hill Airforce Base.  Then on March 23, 1951, Carol and Maynard were married for time and eternity in the Logan, Utah temple.  This began a seventy-one-year working and loving relationship.  As Maynard’s entrepreneurial activities expanded, Carol taught herself accounting and kept the financial records of their several businesses.

As an active member of the Church of Jesus Christ of Latter-day Saints, her testimony of the restored gospel ran deep within her soul. Carol enjoyed reading the scriptures, teaching Relief Society, Primary, Young Women and most often was the lead in the Alto section of the ward choir.  She played the piano in church callings and for her own enjoyment and ensured her only daughter learned to do the same.  For many years she was a member of the Mt. Ogden Ski Club. She loved to travel the world, play golf, water ski, and spend time with her many nieces and nephews. Yet her most dedicated efforts and time went to the care and nurturing of her special needs son.  Carol was a consistent journal keeper.  These records of her life will be a treasure to future generations.

Whether in her home in Bountiful, Arizona, or her favorite cabin at Bear Lake, there was always good nourishment in the form of interesting books, thoughtful conversation, and good food.  Information in newspapers was not read, rather it was consumed.  When prodded, this made for informed and energetic discussions on the political, economic, and social issues of the day.

Her love of art was evidenced by the paintings that graced each residence. Photographs exist of quilts she made and gave away to family and friends.  One hangs in a prominent place in the Bear Lake cabin.

Her parents and two sisters preceded her in death.  She is survived by Maynard (her eternal companion); her daughter Julie Richards (Larry), her son Tony M. Victor; grandson John Richards (Abby), and granddaughter Lauren Wall (Jeff).  She will be greatly missed by her five great grandchildren and many nieces and nephews.  These generations comprise a permanent part of her legacy.  Each has been touched and molded by Carol’s influence.  The family expresses our deepest thanks to the staff and caregivers at Legacy House in Bountiful.  Their personal interest and attentiveness made Carol comfortable and created an inviting environment during family visits.

In lieu of flowers, honor Carol by expanding your horizons with a good book.

To order memorial trees or send flowers to the family in memory of Carol LeAnn (Burt) Victor, please visit our flower store.