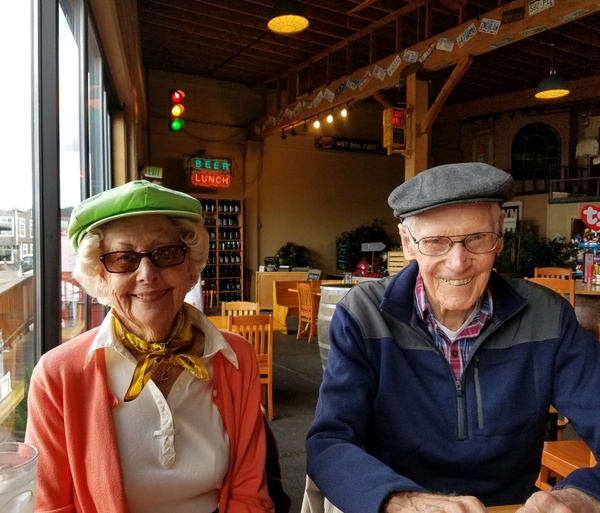 Byron was born on June 28, 1923 at home in Marysville, Idaho. He was the 7th son and 11th child of Washington and Ida Hamilton Lemmon.  Byron graduated from Pocatello High in 1942. He attended Idaho State for one semester before being drafted into the Army. He then saw service in North Africa, Algiers, Italy, and Southern France with an anti-aircraft unit. Byron received the Purple Heart with Oak Leaf Cluster and the Bronze Star.

After returning from the war in 1945 he attended Idaho State College and graduated in 1950 with Bachelor degrees in Business Administration and Psychology. While Attending Idaho State he was active in Sports earning a letter in Boxing for three years, He was President (Duke) of the Intercollegiate Knights, and a member of the I club. He married Patricia Mitchell from Fruitland Idaho in the fall of 1950. After marriage, they lived in Pocatello where Byron was employed by the Telephone Company (Mtn. Bell).  His last 10 years with Mtn. Bell he served as The Benefit Administrator, Retiring in 1985.

Byron stayed involved with Idaho State University after graduation. He was involved with his fraternity Phi Sigma Kappa and he was a Past President of the Alumni Association from 1952-1953 and 1957-1958.  He was involved with Optimist International, the Reserve Officers Association, and ESGR (Employer Support for Guard and Reserve). As well as many other civic organizations. Byron played a great game of golf and enjoyed the outdoors. During the winter months he liked to ski up at Park City. He enjoyed spending time working in his yard and garden each summer.

The family would like to thank Liz at Elevation Hospice for her special care.

Funeral Services will be held at 11:00 am on Monday April 25 at Bountiful First Baptist Church, 1915 S. Orchard Dr. Bountiful, UT where friends may visit family from 10:00-11:00 am prior to services. Internment at Fort Douglas Cemetery, Salt Lake City.

To order memorial trees or send flowers to the family in memory of Byron D Lemmon, please visit our flower store.