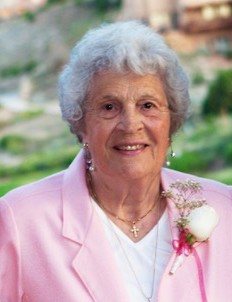 Bruna B. Coffey, 96, passed away on Sunday, September 26, 2021 at Cappella Assisted Living Community in Grand Junction, Colorado. She was born on February 1, 1925 in Trieste, Italy to Phillipo and Anna Carli Beri.

She met and married John D. Coffey on June 2, 1952 in Trieste, Italy.  Bruna was a waitress serving American solders when they met after World War II. Bruna traveled by ship to New York Ellis Island then continued her journey by train to Clearfield, Utah where John and Bruna made their home. They raised three children, Dann, Angela and Alan.

Bruna was a homemaker most of her life and an excellent seamstress. She expertly sewed custom draperies for many years. She enjoyed cooking, knitting and crocheting, flowers and neighborhood walks visiting with neighbors and friends. Bruna loved sitting on the porch swing watching birds and listening to Italian music. She spent her last few years at Cappella Assisted Living Community. She was very social and developed many wonderful friendships. Her favorite song and saying was “Que sera, sera” and was often found singing this song through the hallways. She was loved by many!

Bruna was a member of Clearfield Community Church.

Bruna is survived by her children, Dann of Edwards, CO and Angela Taylor (Richard) of Collbran, CO, five grandchildren and four great-grandchildren. She was preceded in death by her husband, John on July 19 2002 and son, Alan on February 13, 2002.

Funeral services will be held on Saturday, October 9, 2021 at 11 a.m. at the Clearfield Community Church, 525 East 200 South.  Services entrusted to Lindquist’s Ogden Mortuary.

The family requests no flowers.

To order memorial trees or send flowers to the family in memory of Bruna Coffey, please visit our flower store.