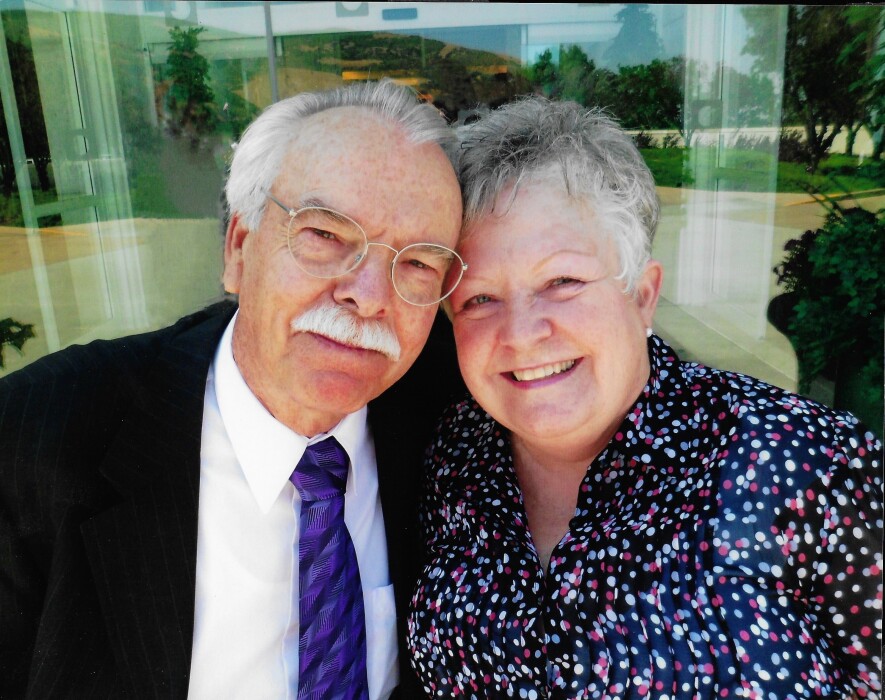 Brent Stevenson Cook passed away on December 3, 2021 at Davis Hospital due to complications of a broken heart after the sudden passing of his sweet wife in June.  He was welcomed into the arms of his awaiting eternal companion as his daughters and granddaughters sweetly sang to him.

Brent was born on July 3, 1941 in Ogden Utah, to Lloyd Jesse and Faye LaDean Stevenson Cook.

He was raised on the family farm. He resided in Syracuse for over 76 years.  He attended Davis High School where he enjoyed slot car racing, U-Control airplanes and fixing or rebuilding anything he could get his hands on.

He married his sweetheart Judy Benton Cook on September 27th, 1962 in the Logan Utah temple.  They had three beautiful daughters.  They were married for 58 years.  In his adult years, Brent enjoyed and excelled at water and snow skiing.  He was a member of the National Ski Patrol at Powder Mountain Ski Resort for over twenty years.  He loved building and flying remote control airplanes and gliders.  He belonged to the Northern Utah Radio Control Aircraft Club.  In his last ten years, he enjoyed collecting and flying drones.  He loved camping and fishing with his family.  Brent loved Pepsi-Cola and was seldom seen without one.

He possessed a gentle, soft disposition.  He didn’t like contention or conflict of any kind.  He has left us all a legacy of Christ like behavior.

Brent had a very amazing mechanical aptitude.  He employed this talent to help and serve others in the form of repairs on farm equipment, boat motors, snow blowers, lawn mowers and many automobiles.  He had a gift for repairing cars that were said to be on their last leg, (usually his daughter’s cars!) Many of these services he gladly performed at no charge.

In 1961, Brent began working for R.C. Willey and Sons delivering furniture.  While there, he acquired his CDL license.  He proudly utilized it throughout his working career.  In 1966, he began working at Massey Ferguson.  There, he had opportunity to work with his brother, Leo Cook enjoying a 15 + year with that company.  In 1982, he began working for Utah State Parks and Recreation. Throughout his career, he built and maintained may structures all over the state of Utah.  He retired from State Parks and Recreation in 2005.

He was a member of the Church of Jesus Christ of Latter-Day Saints and enjoyed many callings: Home Teacher, Elders Quorum, High Priest Group, Ward Mission Leader, Ward Clerk, Building Cleaning Coordinator and Maintenance and Grounds keeper at Camp Woodland stake camp.  Of all of these callings he enjoyed Ward Mission Leader the most.  He enjoyed the young Elders and forged many friendships that continued after the Elders went home.  While serving as Ward Mission Leader, he shaved off his 40 + year trademark mustache so he could be clean shaven like the Young Elders.  His example of “Always trying to do the right thing”, will never be forgotten by his family.  His family is comforted by the knowledge that Mom and Dad will be together for the celebration of Christs Birth.  We are thankful for the knowledge that we will see our dad again.

He is preceded in death by his sweet wife Judy, his parents, his sister Carolyn Cook (Kelly) Green, and his brother Glen Alma Cook.  He is survived by his loving daughters Brenda (Craig) Archuleta of Brigham City, Utah, Caryn (Kelly) Ryan of Clearfield, Utah and Amy (Bryan) Bair of Clinton, Utah.  He had eight grandchildren and five great grandchildren as well as his brother, Leo (Marlene) Cook of Syracuse, Utah and sister-in-law Deanna Cook, also of Syracuse, Utah.

The Family would like to thank Cristi Olmstead, Mom and Dad’s favorite ‘Angel’ and granddaughter Marlee Bair for her selfless service to her “Papa” over the last several weeks.  We deeply appreciate the Leo Cook family for helping our dad have “The Trip of a Lifetime! To Sun Valley Idaho after the passing of his sweetheart.

The family would also like to thank the staff of Davis Hospital, Utah Cardiology and Tanner Clinic for their tender loving care of our dad.

Services will be live-streamed and may be viewed by going to www.lindquistmorturay.com and scrolling to the bottom of Brent’s obituary.

To order memorial trees or send flowers to the family in memory of Brent Cook, please visit our flower store.