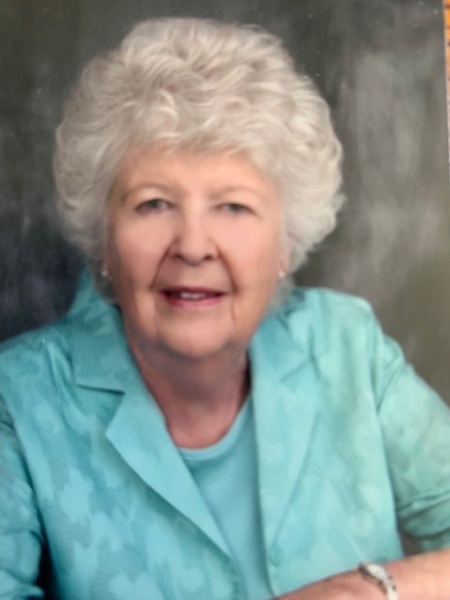 Beverly Markos passed away early morning on June 23, 2022, of complications from COVID. She was 94 years old and passed in her sleep. Beverly was a kindhearted and understanding soul who was everyone’s friend. She was a meticulous housekeeper, an organized and professional school administrator, and a great example of Christian charity.

Beverly Ann Jensen was born on September 8, 1927, in Redmond, Utah to Valton James and Veda Ann Jensen. Beverly was the oldest of seven children. She completed high school in Redmond and shortly after left for Ogden with her good and lifelong friend Jean Christensen.  There she met Jim Markos and they were married on August 13, 1948. Jim’s background was very different than Bev’s, but she was graciously accepted into his family, and she loved the Markos and Pappageorge families she grew so close to.

Jim and Bev both worked and saved to buy a little house in Farr West. There they raised two sons, Tom and Val (Thomas James and Valton Harry). When both boys were in elementary school, Bev became the secretary at Wahlquist Junior High School. She later held that position at Roy High and North Ogden Junior High. She was incredibly organized and detailed in her work and was so respected by those she worked for and with.

She moved with her family to North Ogden when her sons were in junior high school and lived there until she and Jim moved to South Ogden after retirement. When they were empty nesters, Jim and Bev bought a small boat and camper and would spend weekends at Flaming Gorge or other reservoirs. Later they bought a small place in Mesa, Arizona and would spend summers in Utah and winters in Arizona. As Jim aged and his eyesight and health dwindled, Bev became his primary caregiver and did so until he died in 2002.

Beverly lived her last five years in an assisted living facility in South Ogden where she loved and was loved by so many.

She is survived by one sister, DonnaVee Sorensen; a brother, Dale Jensen; her sons, Tom and Val; 5 grandchildren, and 12 great-grandchildren.

Funeral services will be held on Thursday, June 30, 2022 at 11 a.m. at The Church of Jesus Christ of Latter-day Saints Pleasant Valley 5th Ward Chapel, 5735 South Crestwood Dr., South Ogden. Beverly was a member of that ward for many years. Friends may visit with family on Wednesday from 6 to 8 p.m. at Lindquist’s Ogden Mortuary, 3408 Washington Blvd. and Thursday from 9:30 to 10:30 a.m. at the church. Interment, Ben Lomond Cemetery, North Ogden.

Services will be live-streamed and available by scrolling to the bottom of Beverly’s obituary page at: www.lindquistmortuary.com, where condolences may also be shared.

To order memorial trees or send flowers to the family in memory of Beverly Markos, please visit our flower store.