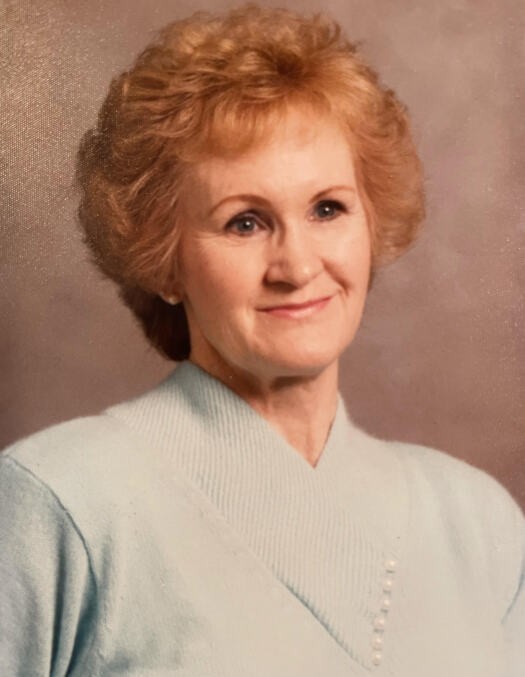 Beverly marched into heaven when she peacefully passed away surrounded by her family on  October 12, 2021, after a 5-year battle with a heart disease called Amyloidosis.  Beverly was 91¾ years old and resided in Centerville, Utah.

Beverly was born in Thatcher, Utah a little town in northern Utah, a week before Christmas in 1929.  It wasn’t really a “town” because it was just a country farm road with one store and a gas pump combined, which her father, Thomas Elias Adams, owned.  She was born at home because in those days they didn’t think it was necessary to go to the hospital in Tremonton, the closest town.

Beverly had four older brothers, so when Bev came along, she was a great source of joy to her mom and dad.  She recalls wonderful childhood memories of swimming in the irrigation canal which flowed behind their house wearing an old pair of bib overalls (swim suits were unheard of) and roaming nearby hills looking for wild pansies and buttercups.  Winter was fun too, because all the children skated on the canal and sledded down hills.

A little sister was born, but did not live.  Then, just a month before Beverly’s third birthday, her mother, Edna Eliza Nelson, gave birth to twins.  The twins lived just a short time, and a few days later, fighting infection, her mom died also.  Beverly stated how grateful she is for modern medicine which we now have to help save lives.

Bev’s dad was bishop of the Thatcher Ward, and was instrumental in the building of a beautiful ward chapel.  He also remarried, marrying their mom’s cousin, Sarah Amelia Petersen. Through that marriage, two more brothers and a sister were added to the family.

The family then moved to Tremonton where Bev’s fondest memories of grade school were playing softball, where she proved to be a pretty good left-handed pitcher, and of playing clarinet in the school band.  (There must have been some schooling mixed in with that…she did take home pretty good grades.)  Tragedy struck again when Bev’s dad became ill and died just a few days before her thirteenth birthday.

High school was the greatest at Bear River High School.  Bev liked to be involved and played in the high school band for four years, where she enjoyed marching in parades and playing in the pep band for games.  She was editor of the school paper, “The Searchlight” her senior year and marched with the Pep Club Drill Team.  She won the girls’ tennis championship her last week of high school, but dropped her geometry grade to do it.  She didn’t need the credit and tennis was more important!!

Bev married her senior-year sweetheart, Rolland Grover, in the Logan temple the summer after graduation.  That fall in 1948, the young couple decided to move with Rolland’s family to Alaska, where his dad was going to buy one of the original colony farms in the Matanuska Valley. They made a long and treacherous drive up the Alcan Highway, traveling in convoy and bringing with them all of their earthly possessions.  (It seems like a pioneer story.) The trip took over three weeks and the highway was often icy and frightening.

Bev didn’t realize that by moving to Alaska she would become a farm girl, but before long, she and Rolland bought a 200 acre farm of their own and she was soon introduced to a herd of 50 cows, which she learned to ‘slap’ milkers on, as well as ‘shock’ hay in the fields and drive a two-ton truck during harvest.

Six little daughters were born to Beverly and Rolland, but they were persistent for a boy.  The seventh was a boy! Later the decision was made to sell the farm and move back to Utah.  They bought a home in Brigham City, and Beverly became a professional working woman.  She trained at IRS in Ogden to do data entry for income tax returns, and that training helped her over the next 25 years.  She worked for the IRS for a year and then landed a good job with Thiokol Chemical Corporation. She also found that she needed to get some “moon-lighting” work to support her seven children, and she became an excellent waitress, working at Maddox in Perry, Utah.

A few years later the family would return to Alaska and Bev and Rolland decided to part ways.  Bev got a job with the State of Alaska in their first data processing office in Anchorage.  Over the years, the division grew and Bev hired and supervised 30 data entry clerks until she retired in 1975.  She also worked at night and set up the original customer name and address files for the National Bank of Alaska and the First National Bank of Anchorage.

In 1970 a new man came into Bev’s life, hence the name of “Barrera.”  Sixto had recently been widowed and left with seven small children.  Beverly became an instant mom to one son and six little daughters, in addition to her own tribe of seven!  Bev carried on with enthusiasm and excitement as these two families merged.  They built a large beautiful home on the hillside outside of Anchorage, and life was busy as you might imagine.

An eventual move back to Utah and Beverly’s roots landed them in Centerville.  She was widowed in 2009 when Sixto passed away.  Beverly continued to love her service in the church, holding numerous leadership and teaching positions throughout her life.  She especially cherished her years of temple service in both the Anchorage and Bountiful temples.

Beverly was a loving and compassionate person who didn’t think twice about helping family, friends, neighbors, or anyone in need.  There was always a spare bed in her home, a meal delivered when needed, a sweet and thoughtful gift or card for special occasions, and a kind word and smile for everyone she met.  She was truly a beautiful person, inside and out.

Beverly truly has left a legacy that generations will follow and remember.  Her faith and love of Heavenly Father was undeniable, and now she has marched into Heaven to be reunited with all those who went before. She will be missed, but never ever forgotten.

For those who cannot attend, services will be live-streamed at www.lindquistmortuary.com.  Please scroll to the bottom of Beverly’s obituary page and click on the link provided there on the day and at the time of the service.

To order memorial trees or send flowers to the family in memory of Beverly Barrera, please visit our flower store.