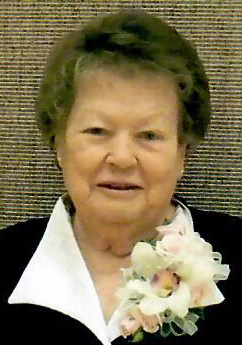 She was born to Hyrum Lawrence and Margaret Viola Green Watkins on May 26, 1932, in Los Angeles, California. The family returned to Utah before her first birthday. She was raised on the family farm where the Kanesville Elementary School now stands. She developed a strong work ethic on the farm where the family milked up to 25 cows by hand.

She attended the old Kanesville Elementary School for two years and Hooper School for the remainder of Elementary & Jr. High. She graduated from Weber High School in 1950. She then attended Ogden Business College.

She married Ronald T. Arnold on August 22, 1952, in Ogden, Utah. They were sealed in the Salt Lake Temple on August 21, 1953. They had five children. They were later divorced.

Beth worked at Hill Air Force Base, Roy and Sand Ridge Jr. High, Roy High, and the IRS before retiring from HAFB in 1995. She also worked multiple part time jobs to make ends meet while supporting her family.

She was a faithful member of The Church of Jesus Christ of Latter-day Saints and served in many church callings over the years. Beth spent several years working at the Ogden Temple.

After retiring she was able to travel the world. Visiting Europe, Australia, and many destinations within the U.S. were some of her favorite memories. She was part of a very special group of friends that danced, traveled, camped and played together. The group purchased property on the east side of Bear Lake where they built a cabin and created their own vacation haven. The past several years she has enjoyed the friendship of an extraordinary group of ladies that traveled, played cards, took organ lessons at the Piano Gallery, and just enjoyed one another. Beth was an avid sports fan and enjoyed watching the Utah Jazz, BYU, U of U, USU, and Weber State games on TV. She spent many hours making quilts for her family and others.

Her family was her greatest joy. Beth was a wonderful example of kindness, humility, and unconditional love to her entire family.

The funeral services will be live streamed at the bottom of the obituary page for Beth at lindquistmortuary.com

To order memorial trees or send flowers to the family in memory of Beth Arnold, please visit our flower store.