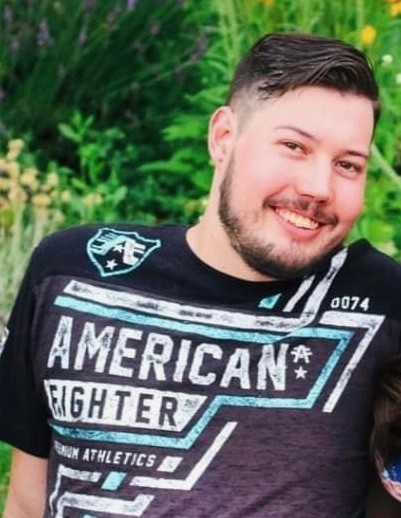 Alexander Donald Sansone was born to Michael Sansone and Charlene (Keller) Sansone on Thursday, October 14, 1993 in Ogden Utah. Since one of the first solid foods he ate as a baby was squash, his mom and dad affectionately called him "Squashy”. When Alex was only 5 years old, he became a big brother to Jordan. Alex was told that not only would he need to protect his little brother but would also need to be his best friend, a role that Alex held dear to his heart, cherished, and honored until the day that he died. In 2009, Alex became part of a larger family with his Dad's marriage to his second wife Janet and then again an even larger family when he married Samantha Adams in 2018.

Alex is survived by his wife, Samantha Michelle (Adams) Sansone; his mother, Charlene (Keller) Sansone; his father, Michael Sansone, and his wife Janet; his brother Jordan Sansone and his wife Peyton; his step siblings, Kameron Squire, Suzanne (Squire) Miller, Jessica (Squire) Glassburn and Sierra (Squire) Van Uitert.  Alex is also survived by Samantha's family who loved him and considered him to be an important part of their large family. Alex is also survived by many friends who he considered family. He believed that ‘friends are the families we choose for ourselves’ and had this quote tattooed across his chest. Alex loved both his blood and friend families with his whole heart.

Alex was baptized a member of the Catholic church as a child. He was raised in the faith through inspiration and guidance from his entire family on both sides and supported by his God Parents, John and Kathy Awe.  Alex was extremely open-minded and enjoyed attending many different faiths with friends. This nurtured a spiritual nature in Alex which guided him at many times in his life.

Alex graduated from WesLake High School in Saratoga Springs, May 24, 2012 and immediately enlisted as a member of the United States Air Force following in his father's footsteps, supporting Supply Chain Management at Holloman Air Force Base. Due to overall Department of Defense downsizing of the military, Alex was honorably discharged and returned back to Utah. Alex worked for Williams International where he was known as a dedicated employee who frequently went the extra mile to support the company's mission.

Alex was a big sports fan, especially teams from the east coast like the Red Sox, Notre Dame, the Boston Celtics and the Boston Bruins. His DVR was routinely filled with recordings of games he didn't have time to watch live. As a teenager his room was painted in Irish colors to honor his favorite team at the time, Notre Dame. A favorite annual tradition was putting on a jersey to watch the Superbowl while feasting on lasagna and garlic bread with the Bost/Sansone family.

Alex met the love of his life, Samantha (Sammy) Adams and was married on Thanksgiving Day, November 22, 2018. He proposed to Sammy at a restaurant called Boston's. Sammy thought it was just a dinner with friends but once they were seated Alex handed Sammy a gift bag and told her to open it. As she opened the bag, Alex took off his coat to reveal a Boston Red Sox jersey and in the bag was a matching jersey. As Sammy pulled the jersey out of the bag, Alex got down on one knee and said, "Samantha Michelle Adams, do you want to be my teammate for eternity?" Sammy said, "Well, duh? Of course, there isn't a better person I could picture spending my life with." From the moment they met they were nearly never apart, except during work hours.

Alex was known for his larger-than-life heart and his compassion and caring for all individuals, even if he didn't know them personally. Even in his passing, Alex continued to give. By being an organ donor, he will improve the quality of life for many strangers he will never know. He was an inspiration and truly represented Christ-like attributes helping all others before himself. Alex was a devoted husband, son, brother, and a genuine lifelong friend to many people.

Alex will be missed and mourned by the many people he touched and who loved him.

Services will be live-streamed and may be viewed at www.lindquistmortuary.com by scrolling to the bottom of Alexander's obituary page.

To order memorial trees or send flowers to the family in memory of Alexander Sansone, please visit our flower store.