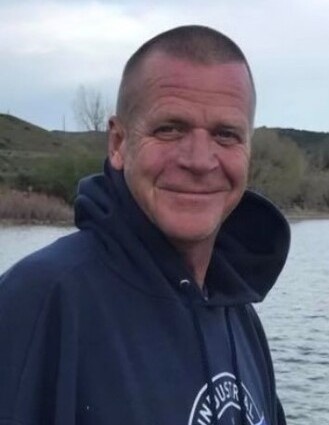 Alex Warner Jacobsen passed away at home surrounded by his loving family on January 28, 2022.  He was born in Roseburg, Oregon to Carol Voniel Winters and Franklin James Jacobsen on March 21, 1964. He attended Ogden High School before moving to continue his education at Utah Valley University.

Alex met the love of his life Marianne Swenson in 1982. Stealing her heart was no easy undertaking, but Alex was the only one for her. They married in Benjamin Utah, September 9, 1983. Together they raised five daughters in Stansbury Park while creating many lifelong friendships. They loved each other profoundly. Alex and Marianne enjoyed activities that they could do together including camping, skiing, concerts, fishing, and boating. Alex was rarely without his “Bunchie” nearby.

Alex was a tall man who could level with any person he met. He started his career in the printing business with Ross and Don Alger at Design Vinyl. He concluded his career at Peczuh printing where he met his second family of 20 years. He was supported until the final days of his career by his dear friend Frank Peczuh. The family is forever grateful for the accommodations made for Alex.

Alex’s greatest legacy resides in each of his five children and his ten grandchildren. He spoke of them with the biggest smile and a full heart. Alex was meant to be a grandfather. He was the fun, camping lover, guitar playing, and connoisseur of sweet treats kind of Grandpa. He never turned down an invitation to sit and play with his grandkids. The void he leaves in their hearts will be filled by the many individual memories he created with them.

His intellect and humor were known to all who knew him. He was the ultimate example of love, acceptance, selflessness, hard work, devotion, and unbreakable will. His musical abilities were enjoyed by many. His children gave him the gift that keeps on giving when he was made into a rockstar at a recording studio. His voice singing his favorite songs will live on forever.

He is preceded in death by his Father (Franklin), daughter (Tracy Jacobsen), and his beloved cats Tiger and Toby.  Services will be held on Friday, February 4, 2022 at 11:00 a.m. at Lindquist’s Layton Mortuary, 1867 No. Fairfield Rd., Layton, Utah. Friends may visit with family from 9:30 to 10:30 a.m. prior to the service at the mortuary.

To order memorial trees or send flowers to the family in memory of Alex Jacobsen, please visit our flower store.