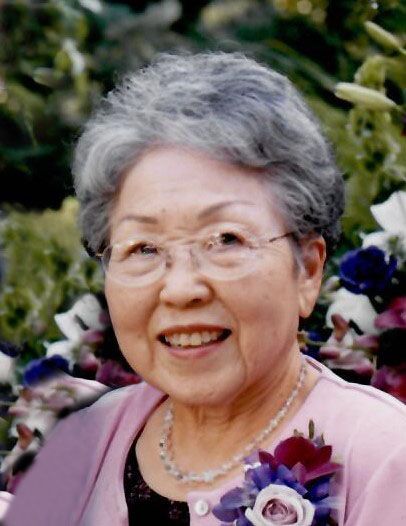 Her father passed away in October 1930 leaving her mother with six children. This was the Depression years and a difficult time for the family.

Aiko graduated from Pocatello High School in May 1938. She moved to Tulsa, Oklahoma in November 1939 to be the live-in companion to the young daughter of a Japanese couple. While there, she attended and graduated from the Oklahoma School of Business in June 1941.

She met her husband Jimmy while he was stationed with the U.S. Army in Camp Crowder, Missouri. They were married in Pocatello, Idaho on July 27, 1944. Following his discharge from the service in December 1945 they resided in Los Altos, California for a short time.

They moved to Ogden in August 1948 and on September 2, 1948, opened Jimmy’s Flower Shop at 450 25th Street. Over the years, the business has flourished and now consists of three stores and a wholesale division operated by their youngest son and two grandsons.

She worked in the business most of her life and was active in Utah floral associations. On the community level, she was a member and served as president of Soroptimist International of Ogden, a service club for executive women. She was an active member of the Ogden Christian Church.

Aiko wishes to express her love and appreciation to her family for their care over a long period of time. Many thanks to the friends who made her life so enjoyable. To the loyal, hard-working employees of our business, you were like a second family. To the staff and residents of Treeo Senior Living, she thanks you for making her senior years so pleasant. Special appreciation to Intermountain Hospice, especially Laura and Sunny.

Funeral services will be held on Friday, April 1, 2022 at 11 a.m. at Lindquist’s Ogden Mortuary, 3408 Washington Blvd. Friends may visit with family on Thursday from 6 to 8 p.m. and Friday from 9:30 to 10:30 a.m. at the mortuary. Interment, Lindquist’s Washington Heights Memorial Park, 4500 Washington Blvd.

In accordance with Aiko’s wishes, rather than a remembrance to the family, donations are suggested to the Utah Alzheimer’s Association, Huntsman Cancer Institute or a charity of your choice.

To order memorial trees or send flowers to the family in memory of Aiko Kusuda, please visit our flower store.