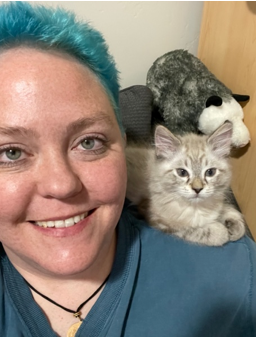 Amanda Kristina was born in Ogden, Utah to Anna Adams on November 6, 1986. The name Amanda means “worthy of love” and that is why the name was chosen - because they are loved by MANY. As they became an adult, Kris had their name changed to “Kris” to reflect their gender identity.

Kris arrived six weeks earlier than expected at just 4 lbs. 12 oz. and left this life far too early. (Kris never arrived early to anything during their lifetime!) Kris was sealed to Anna and David Trevino in the Salt Lake City Temple. Kris was blessed with a wonderful son, Tobias “Toby” Irvin – age 14. Toby loved and defended Kris, and Kris cherished and advocated for Toby.

Kris had a love of music and was blessed with a beautiful alto voice. Kris participated in many choirs throughout their lifetime. Kris had a strong love for animals, in particular; cats, foxes, and possums! Kris also loved the messages from the Star Wars movies. Kris became a true “Jedi” in this lifetime – defending animals and humans of the universe. Kris lived by the saying: “Compassion, which I would define as unconditional love, is essential to a Jedi’s life so you might say we are encouraged to love.” —Anakin Skywalker, Attack Of The Clones.

Kris is a graduate of Provo High School, graduating consecutively with a H.S. Diploma and an Associate Degree from Utah Valley University. Kris later attended Brigham Young University and participated in a study abroad program in London where they developed a great love for travel and people of the world. Kris had a passion and love of learning, was a talented editor, and a beautiful writer. Kris was currently enrolled as a student at Utah Valley University.

Kris was a light in this world. Kris had eyes that sparkled with mischief and fun. Kris drew people to them with their intelligence, a keen sense of humor, and genuine kindness.

Kris was a beloved member of the LGBTQ+ LDS community. Kris often referred to themselves as everyone’s “Possum Parent” and regularly counseled young folks and families to help increase understanding and love for LGBTQ people. Kris had a large social media following and could be found at many public events holding a sign that said “Hug a Transgender Mormon.” Kris generously gifted to the community their vulnerability, their faith in Heavenly Parents who understood their eternal and divine nature as a transgender and asexual human, their humor, and their abundant love with everyone they met.

Kris’s departure from this life, was felt as a disturbance in the force - and leaves a void in many people’s hearts. Kris is survived by parents, David and Anna Trevino of Kissimmee, Florida; sister, Victoria (Ronald) Kala, of Los Angeles, California; brother, Antonio (Tatijanna) Trevino, Pleasant Grove, Utah; son, Tobias Irvin, beloved Grandma – Dian Adams; and their sweet aunt, Aimee (Mike) Egbert. In addition, there are many other extended families and family members that they leave behind.

The family would like to thank the many doctors, nurses and other health caregivers who worked with Kris throughout the years.

“May the Force will be with you. Always.”

In lieu of flowers, the family requests donations be made to the Kris A. Irvin “Memorial Account” at America First Credit Union which will be set up in a Trust for their son Toby.

To order memorial trees or send flowers to the family in memory of Kris Irvin, please visit our flower store.