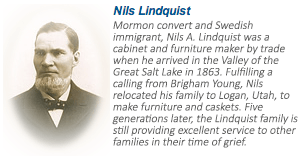 Upon arriving in Salt Lake City in 1863, Swedish immigrant and Mormon convert, Nils (Niels) A. Lindquist, established himself as a premiere furniture maker. One of his beautiful beds is still exhibited today in Brigham Young’s Beehive House in Salt Lake City.

In 1867, Nils fulfilled a calling from, Brigham Young to help settle the Logan area and become a cabinet and furniture maker for a growing Cache Valley. Soon thereafter, he began making caskets and became the town undertaker, naming his enterprise N.A. Lindquist Furniture and Undertaking Goods. The shop’s location was “One Door East of Tithing Office, Logan.”

Nils’s oldest son, Charles J. A., learned the family trade starting with his father and following the first of two LDS missions to Sweden, moved his family to Ogden establishing a mortuary in 1885. As his sons Carl, Clyde, and Milton entered the family business the name evolved to C.J.A. Lindquist & Sons Mortuary. Upon C.J.A.’s death in 1934, his sons, along with his second wife, Ada, continued their service to the families of northern Utah. Their son, John A. Lindquist, began working at the mortuary at an early age. He obtained his education at Weber College and served with distinction in the Army Air Corps in WWII.

In 1941, construction began at Lindquist’s main mortuary facility located at 3408 Washington Blvd. President David O. McKay, a counselor in the First Presidency of The Church of Jesus Christ of Latter-day Saints and future Church president, dedicated Lindquist’s Colonial Chapel in 1942. This landmark facility serves people of all faiths in an atmosphere of peace and serenity.

Lindquist Mortuaries joined an exclusive, worldwide association of independently-owned and operated mortuaries and funeral homes in 1952. Only privately owned, independent funeral homes adhering to the highest standards of integrity, excellence, and superior public service are nominated for membership. Lindquist’s has proudly achieved membership in Selected Independent Funeral Homes (SIFH) since induction over 50 years ago.

Even with our lengthy history and tradition of service dating back to 1867, at Lindquist Mortuaries/Cemeteries, we know that our good name is something we have to earn every day.